The Story of Chard Museum
Chard’s First Museum
Chard had its very first ‘museum’ in 1880. Arthur Hull, a regional male, had developed a collection of ‘curiosities’ while working as a property surveyor in the location and left them to Chard Town Council when he died.
His collection was placed on display screen in the Town Hall however attracted little interest and began to weaken so it was handed over to Somerset County Museum in Taunton in 1917.
Chard and District Museum
The Arthur Hull collection stayed there for the next fifty years until a newly-formed Chard History Group started to project for a museum in Chard to celebrate the story of the town.
The Town Council bought a run-down 16th century building in High Street, which had actually previously been 4 cottages, and offered the restored building to a brand-new ‘Museum Council’. This building, now referred to as Godworthy Home, was the first house of Chard Museum

Godworthy Home and the New Inn circa 1967
Much of the Arthur Hull collection was returned from Taunton and Chard and District Museum opened for the very first time on 20th July, 1970. The Museum grew quickly and soon needed to expand.
Next door to the Museum a bar called the New Inn had actually closed and this too was purchased by the Town and rented to the Museum.
For several years farming equipment had actually been made in Chard and examples began to be added to the Museum’s collections. By now display area was getting really restricted so a brand-new open-sided structure, the ‘Barn’, was built in the late 1980s. This was soon confined to make a weatherproof display area.
In 1994 the Town Council kindly offered the Museum the use of an open space behind the Barn and this field now contains numerous other examples of locally produced farming devices.

Chard Museum is a registered charity (No. 270186) established in 1970. It is managed by a group of Trustees who, like all the workers involved with the Museum, are unpaid volunteers.First registered under the Museums and Galleries Registration Scheme in 1990, it was granted complete Accreditation in April, 2006, one of the very first volunteer-run museums in the South West to receive this recognition.The Museum & Heritage Centre exhibits have been expanded and improved progressively throughout the years and contain a number of collections of nationwide importance including those of John Stringfellow (1799-1883), an early leader of powered flight, and James Gillingham (1839-1924) who was an essential maker of synthetic limbs. 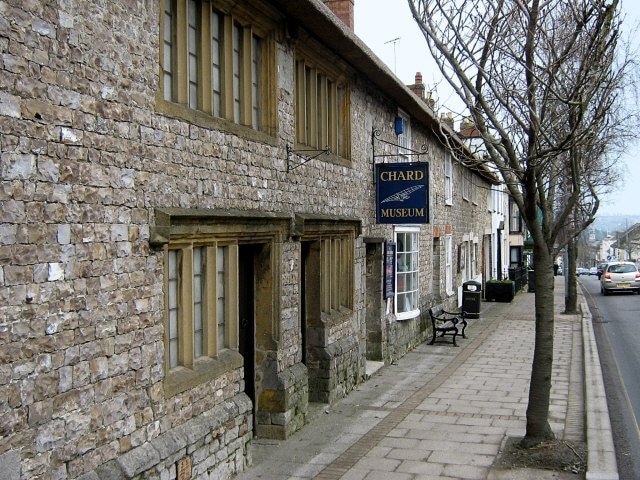