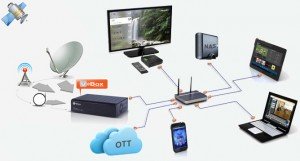 We can set up an Ethernet (Hard Wired) network for you. This kind of network is more secure and more reliable than WiFi, but has the disadvantage of cables running around the house.

Power line networking is an alternative to both WiFi and Ethernet. It gives the security of Ethernet, while also offering a degree of portability, although not completely portable.

Power-line networking is one of several ways to connect the computers in your home. It uses the electrical wiring in your house to create a network.

Power-line networking is based on the concept of no new wires. The convenience is even more obvious in this case because while you may not want cables running around your house, you will always have an electrical outlet near a computer. In power-line networking, you connect your computers to one another through an adapter that plugs into these outlets.

You may wish to share your photographs, music or videos which are stored on one machine to all of the other devices on your network, including games consoles and televisions and home entertainment systems.

We can offer all manner of file sharing solutions, including allowing only certain users access to certain files.

This is an alternative way of file sharing. A NAS box (Network Attached Storage) can be added to your network and be used for both file backups and file sharing without granting people access to your main computer.

If you are looking to extend your home network to a part of your house that your WiFi will not reach then give us a call.

We can provide a wired or wireless network solution to cover all of your home.

This site uses Akismet to reduce spam. Learn how your comment data is processed.